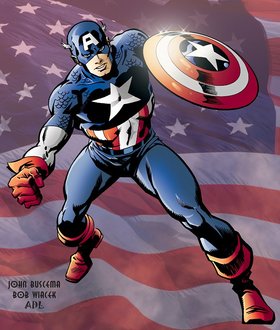 Let me start out by saying that I absolutely did not want to make this costume. Now don't get me wrong I absolutely love Cap but I was so intimidated to be working with spandex for a male costume. Trevor had always talked about cosplaying as Cap and after getting some reassurance from him and the lovely Dee I was ready to take it on. 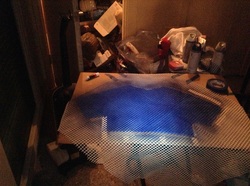 I started out by searching online for the perfect red and white striped fabric. Once I found that I knew that I could get going on this costume. Trevor opted for royal blue spandex and I made everything on the "wrong side" of the fabric so that it wouldn't have that shine to it. To make the pants I used a basic PJ pant pattern and took them in time and time again until the fit just right; they also have an elastic waistband.

The top was patterned off of an Under Armour shirt that Trevor had, instead of attaching sleeves I cut them into the pattern so that there wouldn't be a seam. To get the scale effect I took some carpet lining that I had and I laid it on top of the shirt. I then spray painted it with royal blue spray paint and it worked out much better than I thought. The last step was sewing the white sleeves onto the upper shirt and the day of the con we attached the white star.

The cowl was absolutely the bane of my existence for about a week, I make three different version of it until it worked out. I drew out the eye and mouth opening and I traced around it with Fray Check that that it would stay crisp when I cut it. The head wings are made out of foamie and foam core and they velcro on and off of the cowl. The "A", as well as the start on the chest, is satin stitched duck cloth that I literally glued on right before we headed to the con.

The gloves were made out of red spandex using the good ol' hand turkey method and I made the boot covers out of the same spandex. We made some ankle cuffs out of fleece so that the boots would have some thickness at the top.

This costume was a complete learning experience and I literally had to make the pants, gloves, boot covers and cowl at least 2-3 times before it all worked out. But in the end it was worth it because Trevor wore it so well.

Thanks to Dee for all the tips on this costume and thanks to Peter for giving us the Cap shield for Christmas.