Princess Farah
The Prince of Persia: The Two Thrones
The Maharajahs Daughter 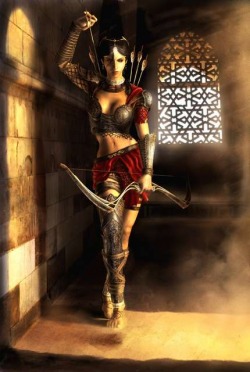 Farah was one of those characters that caught my eye from the second I saw her. Some costumes just stick in your head until you finally decided to make them. That was the case with this one, it just had to be done. In Sands of Time I absolutely loved the character interaction between Farah and the Prince so I really connected with the game because of that. Sadly she was not in Warrior Within but it set up for a nice comeback for her in Two Thrones.


This costume was a challenge from the start, it was always difficult to get good shots of this costume. I ended up working off of less than five images of the character. I decided to interpret the design while still trying to stay as accurate a possible to the character. The fabric I got for this costume was so amazing, it had the deep colors I was looking for and a very soft feel. The skirt was patterned off of a bathing suit wrap skirt and the top was made from a Halloween corset pattern that I found at Jo Ann's. All of the armor for this outfit was made out of foamies and was coated in a ton of glue and spray paint. The jewlery and shoes were purchased off of eBay and I think they really bring the costume together nicely. I used my same black wig for this one but I added a braid to the back of the wig to match the character. The only downside to this costume was how restrictive the armor made my movement and having to be laced into just about every part of the outfit. 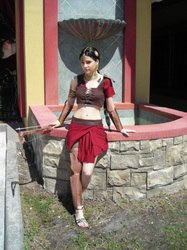 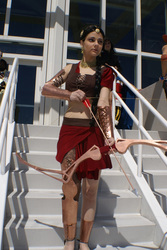 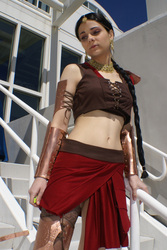 Photos taken by Maboroshi of RisingSun.net 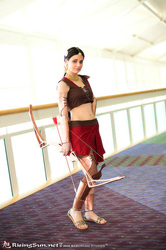 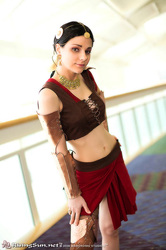 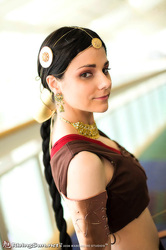