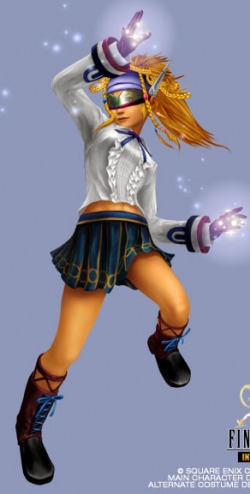 A lot of my early costumes were all different versions of Rikku, for some reason I just really loved her and all her outfits. Originally I was making this costume for a EGL/School Girl gathering but I decided to wear it to the SoCal Spring Gathering instead.

The shirt came from the thrift store, I shortened it along the bottom and added some ruffles going down the front. I made the cuffs out of fun foam and added the different color stripes, then I attached them to the bottom of the sleeve to give them that hovering look. The bow is self explanitory; but blue ribbon, tie in bow and thats that.  For the skirt I used a pleated skirt pattern and after some re working and seam ripping I managed to get the pleats just right. I then added yellow bias tape to all of the edges and cut out numerous circles for each pleat. The skirt came out incredibly way too short and my ass was practically hanging out, I really should have known better but everyone makes mistakes. For the boot covers I used basic cotton fabric in the correct color and just made them fit over the boots. Then I hot glued blue ribbon going up the front to make it look like they were laced up.

The visor was a lot of fun to make and it was one of the cheaper parts of this costume. I purchased clear table vinyl and in order to make it green I colored it with a permanent marker. Then I cut it out in the shape I needed and attached it to a band made out of fun foam. The antennas on the side were also made out of fun foam and I glued them onto the main band. The visor is held on with two bobby pins that I used to hold it to my wig. Speaking of the wig that is something that has gone through a few revisions from when I first made it. It starts with a short blonde wig that I pull back into a pony tail. Next I put on the blue bandanna and then I pin on all of the looped braids and extensions. On top of that I put these hair pieces on top to cover up all the bobby pins and then I clip in a long pony tail that attaches with a hair clip. It's a lot of weight to wear on top of my head but it works great every time. 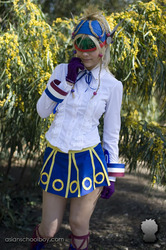 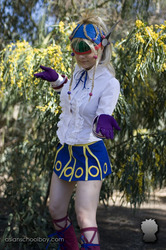 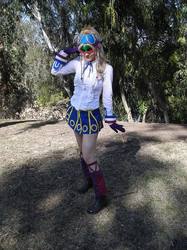 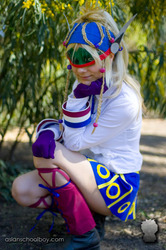 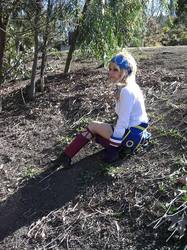 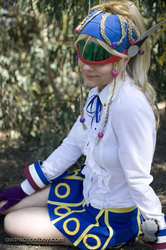 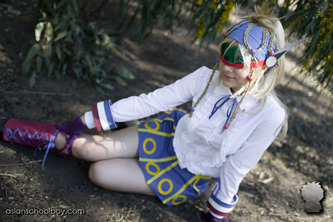 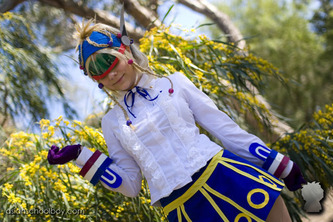 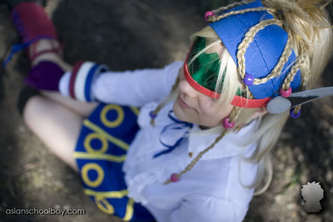