I actually already made this costume six years ago and wore it to MegaCon back in the day. Most cosplayers go through their Final Fantasy stage and I was no exception.

The inspiration for this costume is Dee's lovely Lulu costume, she had decided to wear it again and asked if I would wear my Rikku costume with her. Originally I made that costume back in 2004 so I decided to remake the entire thing using only the shorts from the original outfit.

I actually started making an Anders costume from Halo Wars, her and Rikku have very similar tops so I scrapped that outifit and used the fabric for RIkku. It was a standard orange rib knit which was used for the long armband as well. I ran two princess seams up the front, thanks to Dee's recommendation, and then I added a high ruffled collar. For the flags on her back I used blue duck cloth and sewed white bias tape around the edges, for the flower detail I glued on two silk sunflowers. The silver pieces that go on my shoulder blades are simply made out of foamie and painted with acrylic metallic paint.

The shorts just needed to be shortened a bit and I added new white ruffles to the bottom. In the end I still was't too happy with how they looked but due to a lack of time I went with them. Her leg pouch is strips of vinyl sewn to elastic and I covered a pouch I had with the same vinyl and glued that on. I also made the belt using yellow and orange belting and lots of eyelets that I hammered in one at time. The socks were actually fun to make, I just made all the pieces separate and attached them to white knee highs. For some reason I added a bunch of detail to them such as eyelets, top stitching and d-rings. 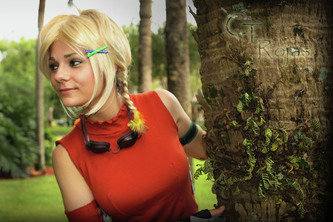 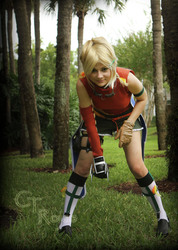 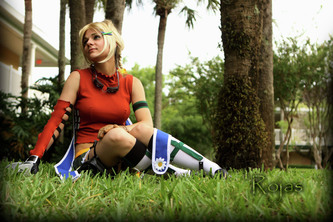 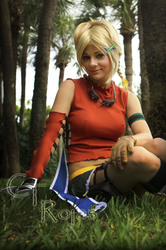 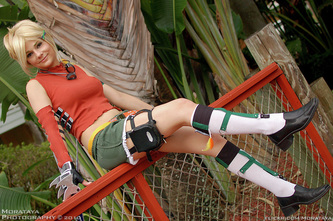 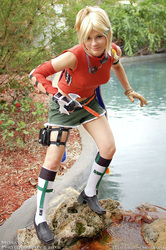