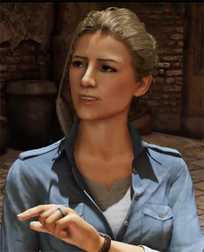 The Uncharted series is one of my video game loves, so I was very happy to hear that Elena would indeed be in part 3. When I first saw her outfit I thought it was an ok look for her, but I definitely liked her appearance in Uncharted 2 much better. Once Trevor agreed to be my Drake again it was time to put this costume into motion.

Oh this costume, it's simplicity was so incredibly frustrating for me. Originally I purchased a shirt from Goodwill and altered it, but I just didn't like the way it fit. I looked around and found the perfect shirt at Target, but it was white, so I decided to dye it. I had a very hard time getting a dye in the proper shade of blue, you would think it would have been easy. After my first try the shirt turned out way to dark and even after a round of lightner it still didn't work. So I had to buy the same shirt again and after some careful mixing I got a blue that was close enough.  I changed out the buttons on the shirt and added the small flaps to the top of the shoulders. The pants were a lucky find at Target, I got them on clearance for $5, and the shoes were also a find at Goodwill for about $4. The undershirt was something I had in my closet, it was long sleeve so I shortened them and added the small slit in the front.

The accessories were simple for this outfit; the watch was something that I already had and the wedding band I purchased. I made the holster out of the same fabric used for the Drake accessories, and the press pass was something I put together in photo shop and printed out. Of course I used them same wig as before and Dee helped me pull it back and style it. The one thing that bothers me about the outfit is her untucked shirt in the front, I just felt that I couldn't get it to look right. 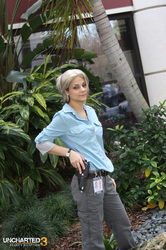 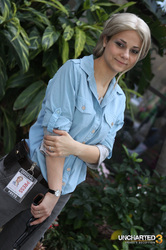 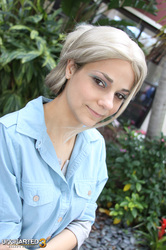 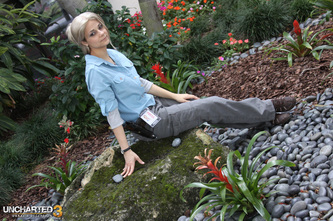 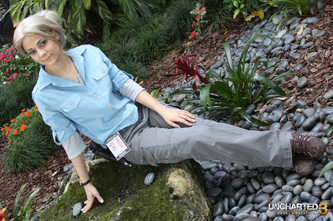 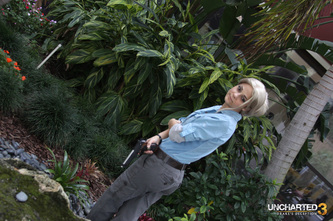 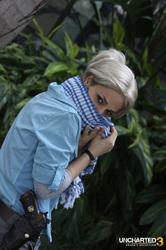 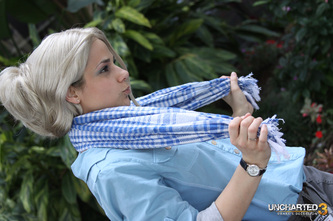 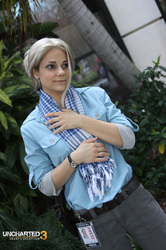