Sword of a Princess

In the fan art I based my costume on Zelda is wielding the Master Sword that Link uses, but I decided to change this up to fit the costume. Twilight Princess was at a fever pitch when I started work on this project and Zelda had finallly been given her own sword. I deciced to make her Twilight Princess sword and I thought that it would be nice touch for the costume.

This was the first prop I made after I had moved out of my home in Florida, so it was a challenge to make in a little apartment. I turned my little patio into my work station and I don't think my neighbors appreciated hearing my jig saw. To start this sword I had my husband draw out a stencil in Adobe Illustrator so that I could trace it out onto the wood. Once it was traced out I took the wood outide and cut it out with my jig saw. The first cut out didn't work so well and it ended up snapping in half, so I resized the stencil and cut out a second sword. This one worked much better and I was able to work with it. 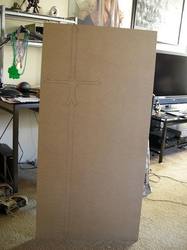 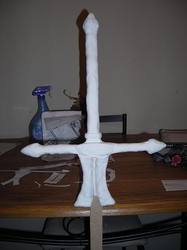 Once it was cut out and I sanded down the edges Chris then help me sand down the sword so that it would peak in the center of the blade instead of being flat. I sculpted model magic clay around the handle and hilt of the sword to give it a 3D look and that worked really well. The clay works so well and once it dries you can use sand paper to even it all out. The next step was the paint job and I used metallic spray paint on the blade and the clay, once that dried I wrapped the handle of the sword in purple bias tape. 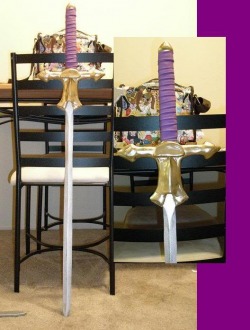 You never see a sheath for this sword in the game, but since I would be carrying it around at a con I decided to make one. I used the same wood for the sword and just traced around the blade to get the right size so that the sword would fit inside. Once I cut out the two pieces I made sure to add a small buffer to the sides and then I glued it all together. We added a few small screws to make sure it was held together firmly and then spray painted the entire thing purple. I decided to decorate the sheath by free handing gold scroll work on both sides with fabric paint that comes in the little squeeze bottle. For a strap I used the same fabric I used for the belt of my costume and I attached it to the top and bottom of the sheath. To top it all off I added a small piece of foamie to the top of the sheath to give the clay something to rest on. And that his how this story ends. 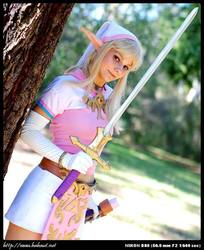 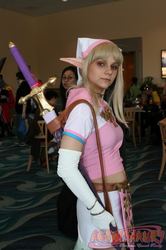