Tifa is another character that I have cosplayed more than once in her different outfits. First the original VII costume, then Advent Children, so it was only natural to make her Crisis Core cowgirl outfit. Like most people I am a huge fan of Final Fantasy VII, and Tifa was always my favorite so it always made sense to cosplay here. This time around I made this costume to go with Indra's Crisis Core Cloud she was wearing to Comic Con. I decided to make this about two weeks before the event and I managed to get it done on time.

For this costume I used the left over brown fabric I had from my Farah costume, so I really didn't have to purchase much for this one. I ordered a cowboy hat off of eBay, used my boots from Zelda and for a wig I used my good ol' black wig that  works for all my costumes. All I really had to do was sew together a skirt and vest, plus the little white bustier that she wears. Then it was just a matter of adding all the little details; fringe, pockets, buttons etc. to give the costume that "western" look. I only regret that I ordered the hat one size too small so it doesn't fit well on my head because of the wig. Other than that it was a real treat to cosplay FFVII again, especially with Indra as my Cloud. 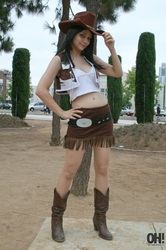 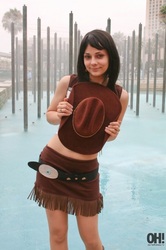 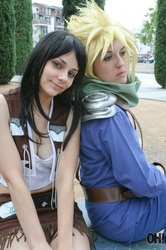 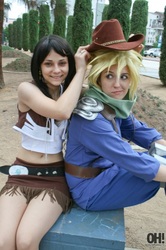