I think everyone grew up with DragonBall Z and Sailor Moon being their first anime love. I remember when I first started in high school DBZ was still new and only a few people knew about it. I loved it and it and before I knew it my nickname became Chi Chi. Once I started cosplaying I knew the day would come when this costume would happen, I chose her Buu saga outfit to match with Will's Majin Vegeta.

To start out with this costume Dee helped me draft a pattern for a Chinese dress. Once we worked it out after some trial and error it was fabric shopping time; this entire costume is made out of Kona Cotton from JoAnn's. The dress took some extra work in getting the top to fit properly and not be baggy, I added some darts along the bust to take it in a bit. I decided to forgo a zipper and added velcro instead. The entire right side of the dress, including the shoulder and collar close with velcro. For the red trim I used red bias tape all along the edges of the dress and I also used it to fake the closure on the front of the dress. My only regret with the dress is that I think I cut it too short since Chi Chi's goes down so far but I still like the way it looks on me.

The pants were made using a basic pajama pants pattern, and the sash is nothing fancy and closes in the back with velcro. I purchased fake Uggs at Target and made boot covers out of those using the same purple fabric. I attached foamie to the bottom to give them some grip and the tied ribbons around the middle. The sash was absolutely annoying >_< It was the one thing I though would be easy but it gave me such a hard time. After a lot of trial and error I finally got it to lay flat on my shoulders like I wanted. Dee and I determined early on that I wig really wouldn't work for me, so I decided to use my own hair and a hair piece. The bun is a clip on that I ordered from House of Beauty, before we clipped it it I pulled my own hair into a tiny bun and we sprayed my hair black with temporary hair color. Then we just pinned the bun in place and I tied the ribbon around it, once this was done the entire look was completed.

The earrings and bracelet were purchased from Claire's, Dee helped me with my hair and Indra did my make up. I loved wearing this costume, it really was a cosplay ten years in the making.

Photos by Michael Iaaca at MegaCon 2011 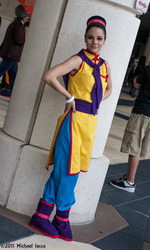 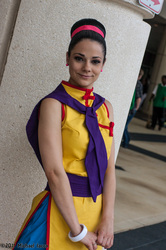 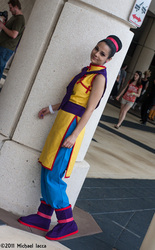 Photos by Hoodedwoman at MegaCon 2011 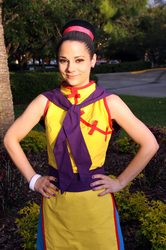 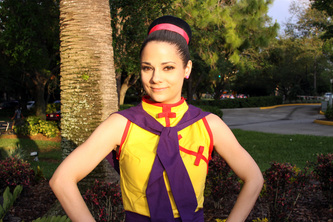 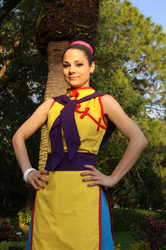 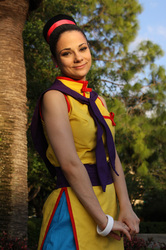 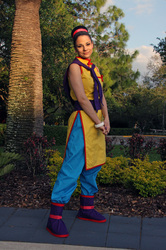 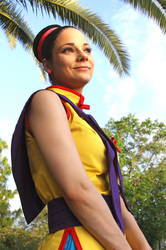 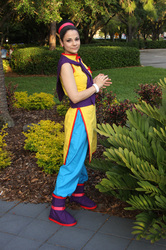 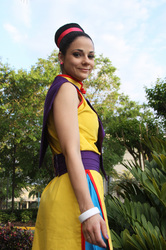 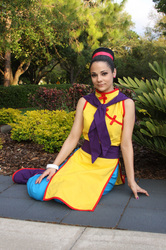 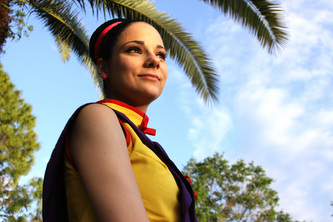