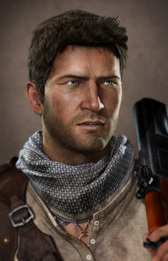 Oh Uncharted, I love you dearly. This was one of those costumes that I never thought about making-I knew I was going to make it. I spent plenty of time working out every little detail to make this outfit look perfect. These games mean so much to me and making this costume is a testament to my fandom.

I started out with the basics for this costume; find what I can't make either online or in stores. The shirt and pants both came from Target and the shoes and AK were borrowed from Adrian. The scarf was the one thing that I really wanted to nail, and after scouring the internet I found the perfect match on eBay. Of course the ring and belt buckle came from the special edition of the game and the belt is from Goodwill.

Now the tricky part - making the holster and bandolier. The first part of this process was to find the right fabric for it. Originally I considered using leather but that is a new territory for me so I opted for vinyl instead. Once I got the fabric I started to draft patterns and figure out how all the pieces fit together. Now these things always seem to look different so they aren't 100% accurate but I believe they are a great match. All of the vinyl is top stitched and I chose to glue it together with E600 instead of sewing them together. The back of the holster gave me the most trouble since I tried so hard to get just the right shape. The holster has 6 belt buckles, 9 gold buttons and many hours of my time. I used the same method to make the holster and pouch that go on each side. For the bandolier I purchased fake bullets from Party City and glued them down one by one. Then I cut a long strip of vinyl and laid it over the bullets and glued it down between each one. To finish the front I added small triangle flaps to give the look of pouches and then each one got a silver button to top it off. The back has seven small pouches that were just glued on in a row and then decorated with a button. Last but not least was the cuff watch that Drake wears in each game. I purchased square watch face and fashioned it to vinyl straps that I sewed together, then I added some snaps and it was good to go. In the end I had to laugh because who knew this outfit would end up having 22+ buttons on it O_o 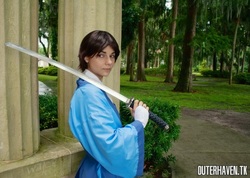 The original wig before being re-worked for Trevor.

The finishing touch for this costume was the wig, and this one took plenty of Dee's magic. This wig was originally a flip wig that Dee flat ironed for me to use as Soujiro, and it was the closest match I had for Drake. After about an hour worth of cutting and working she had the look nailed! 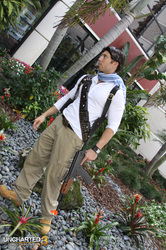 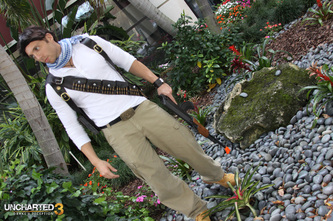 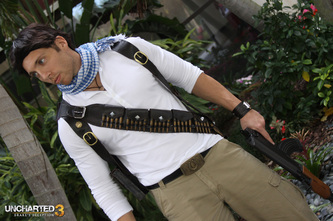 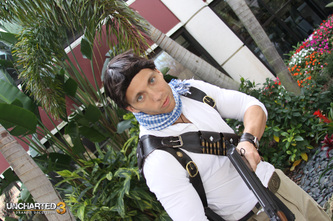 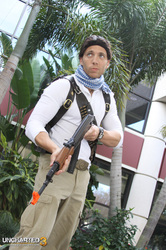 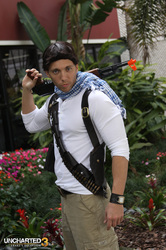 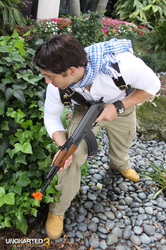 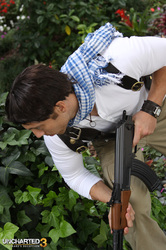 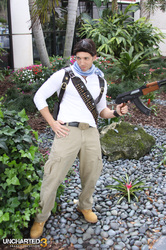 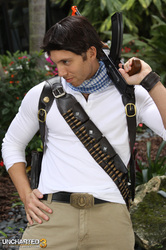